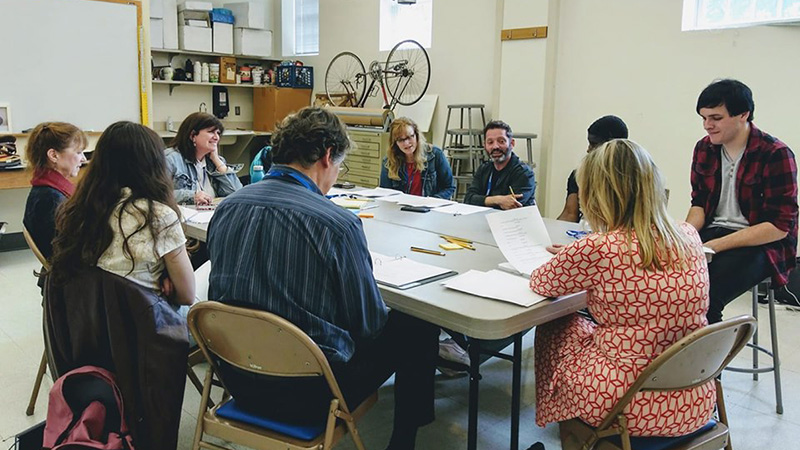 Playwright Susan Cinoman, our 2019 Artists’ Award winner in drama, has been busy reworking her play Guenevere for presentation at the festival in September. A staged reading is scheduled for Saturday, September 28, at the Christ Episcopal Church in Guilford, our home for most of the festival’s dramatic performances this season.

Guenevere uses the King Arthur legend to illuminate the struggle for power and control between women and their closest male friends, in love, at work and at play. Guenevere, a childhood friend of Arthur, pulls the legendary sword from the stone and becomes the rightful ruler of Camelot—setting up a battle of wills, intrigue, romance, murder and a feminist perspective on the dynamics between men and women, on politics and on destiny.

Guenevere was in development at the time Susan received the Artists’ Award in September 2018. In reworking and refining it over the past year, Susan says her goal has been to create something that offers “a transcendent experience, where the audience will be transported to a fictional place out of time, that feels real, funny, very sad and triumphant.”

Developmental readings in New York City and Pawling, New York, have played critical roles in the play’s progress. The New York City reading, held by invitation in January, was directed by Karen Carpenter (Love, Loss and What I Wore) and featured the dynamic Tom Pelphrey (Ironfist, Marvel), Kate Arrington (Billions, Grace), Katye Campbell (Cal in Camo), David Levi and Trey Davis. The photo above is from the Pawling reading.

Some of those actors will reprise their roles in Guilford. Hannah Simms will direct, as she did for the play’s 2016 debut at Connecticut’s Ivoryton Playhouse and for a brief reading at our Artists’ Awards ceremony in September 2018. Karen Steinbacher, one of Susan’s frequent collaborators, is creating costumes. Stuart Spencer of Sarah Lawrence College is dramaturg.

We’re proud to have supported Susan as she’s worked to complete Guenevere and can’t wait to see how the play has shaped up. Susan’s comedic, dramatic spin on gender roles and equality couldn’t be more timely.