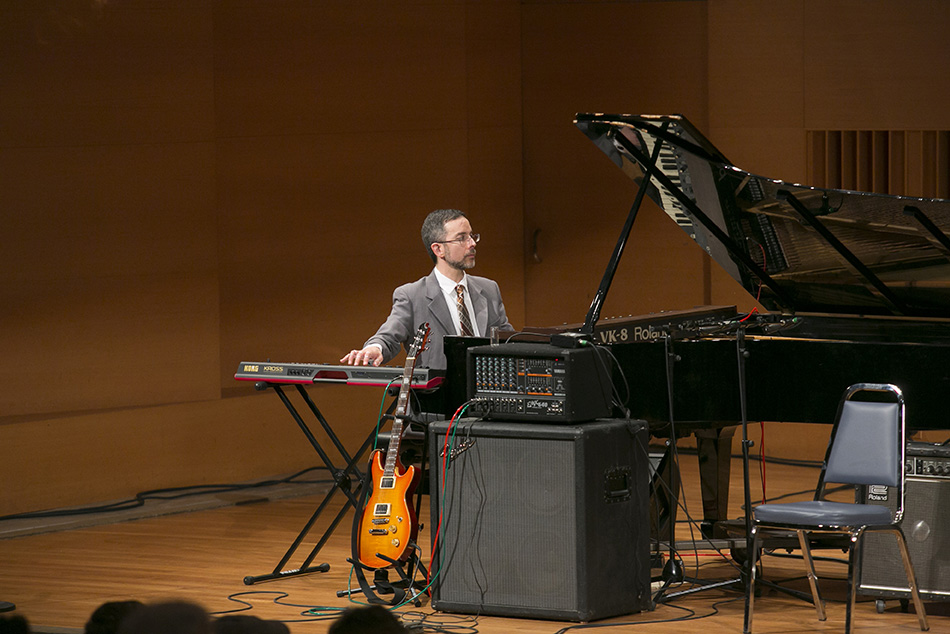 Part of the score of Noah Baerman’s Cliff Palace

Pianist Noah Baerman, recipient of the inaugural Guilford Performing Arts Festival Artists’ Award in Music, recently put the finishing touches on his extended jazz composition, Cliff Palace, after working on it for much of a year. He sent us an email on September 3, saying, “As of this morning, I am DONE with the composition,” and attached a snapshot of the score (measures 509-515!) Like we said, “extended.”

Noah will premiere Cliff Palace during the festival on Friday, September 27, at 8:30pm at Guilford’s Arthur Murray Dance Center, which will be fit out for a jazz room that night. We’ll be very excited to hear the piece, whose composition was supported in part by a $2,500 grant accompanying the award. The Artists’ Awards, presented biennially and funded in part by the Guilford Foundation, are intended to encourage the creation of new work by Connecticut performing artists, who will debut their commissioned pieces at the festival.

Cliff Palace is part of a larger body of Noah’s work that pays tribute to a friend, frequent collaborator and former student named Claire Randall, who was murdered at the age of 26 while intervening in a domestic situation. Noah was deeply moved by Claire’s capacity for strength, integrity and community-building, and her commitment to social justice, and he was shaken by her death in 2016. Since then, he’s dedicated considerable time, energy and creativity to exploring her impact, on himself and on the world.

Noah spent much of 2018 developing work in Claire’s memory with the support of an Artist Fellowship Award from the Connecticut Office of the Arts. He says that in June 2018, while on a trip through the Mesa Verde cliff dwellings of the ancestral Pueblo people in Colorado, he knew he had to compose a specific kind of piece. He applied for the festival’s Artists’ Award grant in September that year, won, and Cliff Palace is the result. It is tentatively slated to be released on Noah’s RMI Records label as one side of a double LP called Love Right, a set of music honoring Randall. Sales of the record will benefit Claire’s Continuum, an initiative Noah began to support the collective creation of socially conscious work by first-time artistic collaborators.

After a year of bouncing between inspiration and craft modes—separated by marinating periods—Noah says on Cliff Palace’s completion, “This is the piece that I knew I needed to write.” Consistent with much of Noah’s music, Cliff Palace traverses a broad range of harmonic, rhythmic and emotional terrain. Festival audiences will hear it performed by an extraordinary sextet of musicians: Noah on piano, Nadje Noordhuis on trumpet, Kris Allen on alto sax, Kate Ten Eyck on euphonium, Henry Lugo on bass and Tyshawn Sorey on drums.